Very interesting interview of the american anthropologist Michael Tomasello (Max-Planck-Institut for Evolutionary Anthropology, Department of Developmental and Comparative Psychology, Leibzig, Germany). The interview is conducted by Gert Scobel and was recorded in October 2008 on the German public channel 3Sat. This is the full version of the interview, which covers a broad range of topics from the notions of (shared) intentionality and its ontogenic emergence in human beings to the origins of human communication (in contrast to the one of the Great Apes), to the biological and cultural dimensions of human social behaviour, and to collaboration and altruism. Enjoy!

More about Michael Tomasellos Book: "Why We Cooperate" 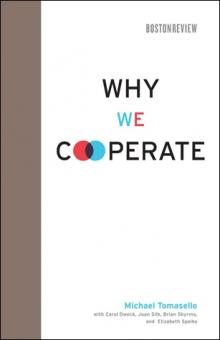 Drop something in front of a two-year-old, and she's likely to pick it up for you. This is not a learned behavior, psychologist Michael Tomasello argues. Through observations of young children in experiments he himself has designed, Tomasello shows that children are naturally—and uniquely—cooperative. Put through similar experiments, for example, apes demonstrate the ability to work together and share, but choose not to.

As children grow, their almost reflexive desire to help—without expectation of reward—becomes shaped by culture. They become more aware of being a member of a group. Groups convey mutual expectations, and thus may either encourage or discourage altruism and collaboration. Either way, cooperation emerges as a distinctly human combination of innate and learned behavior.

In Why We Cooperate, Tomasello's studies of young children and great apes help identify the underlying psychological processes that very likely supported humans' earliest forms of complex collaboration and, ultimately, our unique forms of cultural organization, from the evolution of tolerance and trust to the creation of such group-level structures as cultural norms and institutions.

Michael Tomasello is Codirector of the Max Planck Institute for Evolutionary Anthropology, Leipzig. He is the author of The Cultural Origins of Human Cognition and Constructing a Language: A Usage-Based Theory of Language Acquisition.

"... the fascinating approach to the question of what makes us human renders this a singularly worthwhile read."

“The work of Tomasello and his colleagues provides the best and most exciting point of entry into a literature that will certainly shape philosophical debates for the years to come.”